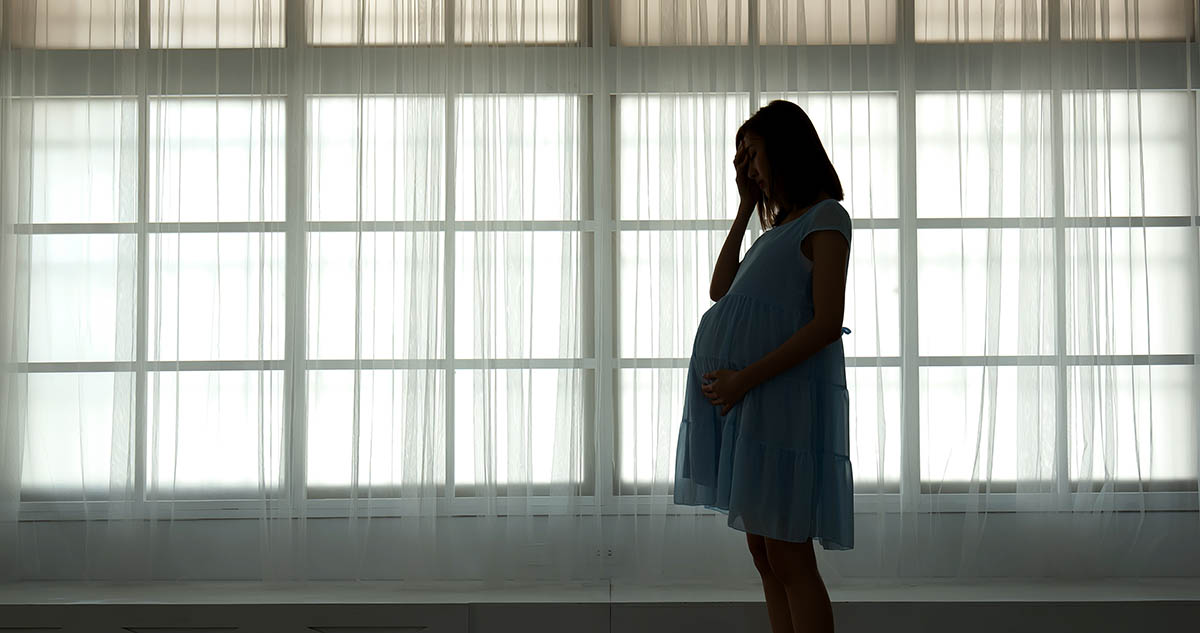 Which antidepressants are considered safe while pregnant?

As with any medication, antidepressants have the potential to cause side effects. The first line (preferred) treatment for depression, especially for pregnant women, is Selective Serotonin Reuptake Inhibitors (SSRIs) since they typically carry minimal side effects and have been studied with large data sets.3,4 Other classes of antidepressants (e.g. Serotonin Norepinephrine Reuptake Inhibitors (SNRIs) like venlafaxine and duloxetine, Tricyclic Antidepressants (TCAs) like nortriptyline, and other medications, like bupropion and mirtazapine) are not considered first-line because of scarce research assessing their safety in pregnant women.4 Furthermore, some research indicates that TCAs or SNRIs, which are used mainly for treatment-resistant depression, may be associated with higher risks of malformations than the first-line medications.4

Are there risks with SSRIs?

SSRIs are the first-line treatment for depression because they have minimal side effects and have been relatively well studied. It should be noted, however, that not all SSRIs are equally safe during pregnancy, and that there are some side effects about which mothers and providers should be aware.3

Although rare, special considerations should be made for pregnant women taking SSRIs because the drug may pass from the mother to the baby or may concentrate in the amniotic fluid surrounding the baby.1  In some cases, SSRIs can cause low birth weight, preterm birth, increased chance of miscarriage, and postnatal adaptation syndrome (PNAS). PNAS is similar to adult serotonin withdrawal which can cause irritability, excessive crying, tremor, lethargy, under-activity, reduced feeding, tachypnea, and respiratory distress in the infant.1,3 These symptoms typical resolve within 48 hours after delivery.

SSRIs alter the concentration of serotonin where it is needed.

SSRIs work by keeping serotonin actively available for longer in the body. Serotonin plays a role in depression but also has important roles in the developing fetus. Serotonin is involved in the differentiation of heart cells and the structure of the heart.2 Thus, SSRIs can affect the delicate balance needed for fetal development and can affect the normal development of the baby’s heart. 2 An observational study carried out by Bérard et al., (2007) involving 1403 pregnant women found that congenital heart defects appeared in 2% of the newborns of mothers who used paroxetine and in 1% of newborns of mothers who used other SSRIs.5 Congenital heart defects affect about 1% to 2% of all births (regardless of medication use).6 Therefore, SSRIs are not likely to increase this risk.

Fortunately, there are some antidepressants with minimal side effects during pregnancy, such as sertraline and citalopram, which are considered first-line treatments.1 For new prescriptions, sertraline is often preferred because it has decades of historic use during pregnancy and its concentration in breast milk is low,1 though both options are reasonable. Although sertraline is the first choice of many obstetricians, if a mom is currently taking a different antidepressant that is successful for her, it is usually preferable to keep mom on that medication. Switching medications can lead to unnecessary stress, take a long time, and the new drug is not guaranteed to be as successful as the prior drug. For personalized information, ask your healthcare provider to have a conversation about the risks and benefits of staying on current treatment versus switching to the “ideal” medication.

Some SSRIs may need to be changed during pregnancy

Several studies have looked at the consequences of antidepressant use during pregnancy and consistently found that two SSRIs, fluoxetine and paroxetine, are more likely to cause severe risks to the infant. While the absolute risk to the infant is still fairly low with these drugs, many other options are available. It is best to avoid these drugs during pregnancy when possible. Mothers new to antidepressants should avoid fluoxetine and paroxetine. Most patients who become pregnant while on these drugs are switched to a safer alternative until delivery. However, these drugs may be used during breastfeeding.

According to data from the National Birth Defects Prevention Study, taking paroxetine during the first trimester is associated with birth defects which include malformations of the brain and skull or abdominal wall (anencephaly, omphalocele, and gastroschisis).2 Paroxetine has also been associated with increased risk of cardiac malformation such as atrial septal defects.2 As a result, in 2005, the FDA issued a Public Health Advisory and reclassified paroxetine as pregnancy category D, which means that there is evidence of risk to the fetus with use of this medication, but if no other option is available its potential benefits outweigh the risks.1 Similarly, use of fluoxetine during the first trimester is associated with atrial septal defects, right ventricular outflow tract obstruction, craniosynostosis (early closure of the skull bones), and renal dysplasia.1 As a result, fluoxetine was classified as pregnancy category C, which means the drug has no well-controlled studies in humans but its benefit could justify risks.7

How can pregnancy affect my treatment?

Pregnancy affects the amount of antidepressant circulating in a mother’s body. During a pregnancy, changes in the absorption and metabolism of SSRIs can cause the concentration of the SSRI to be either too low or too high, thus, interfering with its therapeutic effects.1,2 These changes can be seen especially during the third trimester. As a result, a pregnant individual taking an SSRI should work closely with her doctor to ensure her antidepressant is having the intended effect.1

Risks of NOT treating depression

Although side effects can occur with antidepressant use during pregnancy, there are also risks of leaving depression untreated while pregnant. One study showed that women who discontinued their antidepressants were three times more likely to struggle with another episode of depression compared to those who continued their treatment throughout their pregnancy.1 Furthermore, untreated depression during pregnancy is associated with substantial risks including pre-eclampsia, preterm birth, low birth weight, failure to seek prenatal care, and inadequate diet.8 Use of substances like recreational drugs, alcohol, tobacco, and caffeine, which can harm the developing fetus, are also higher when depression goes untreated.1,2,8 Furthermore, untreated depression was associated with a 20% increase in suicide attempts in adolescent mothers.2 Thus, stopping treatment of depression while pregnant does not eliminate risks, but rather can result in negative consequences for both mom and baby.

Depression treatment from pre-conception to postpartum

When possible, women who are trying to conceive and taking antidepressants should have a conversation with their doctor before becoming pregnant to make any necessary adjustments to the treatment.1 Once pregnant, it is important that your obstetrician work closely with a psychiatrist  for treatment decisions and monitoring of depression.

If a woman is already on an antidepressant when she becomes pregnant, it is not advised to suddenly stop the medication. Instead, adjusting the dosage or switching to a different antidepressant may be the next step.1 If a woman is taking paroxetine before becoming pregnant, it is highly recommended that she be switched to another SSRI because paroxetine has the highest potential for causing birth defects.1 The ideal treatment for depression while pregnant is to use an antidepressant at the minimal dose necessary to control symptoms of depression so as to minimize harm to the baby while addressing the mom’s needs.

After delivery, the baby should undergo comprehensive diagnostics for congenital abnormalities and be monitored for any symptoms of withdrawal (PNAS). Adjustments in the treatment for the mother should be made as necessary.2 Antidepressant use while breastfeeding can also be safe, and recommendations differ slightly from recommendations while pregnant.

It is common for pregnant women to want to put their baby’s health before their own. In the case of depression, it is important to understand that leaving depression untreated also poses risks to the infant. The benefits of treating depression often outweigh possible risks for the fetus, particularly when safe medications and monitoring are available. Through discussions with your healthcare provider, decisions should be made to minimize the risks of both depression and its treatment during pregnancy.

4.         Muzik M, Hamilton SE. Use of Antidepressants During Pregnancy?: What to Consider when Weighing Treatment with Antidepressants Against Untreated Depression. Matern Child Health J. 2016;20(11):2268-2279.

Is Ketamine Safe to Use for Depression During Pregnancy?