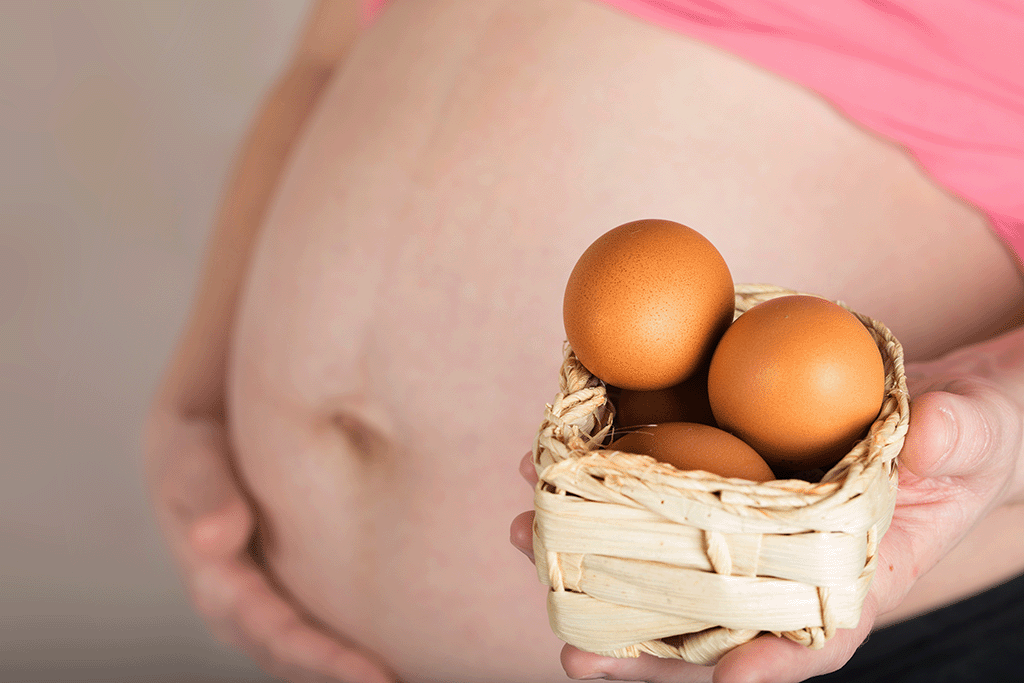 Pregnancy and lactation require intense maternal bodily adaptions and changes in nutritional needs to support the growth and development of the fetus. Certain nutrients are particularly important while pregnant or breastfeeding.1

Choline has recently become a “hot topic” for nutrition during pregnancy. Large amounts of choline-derived molecules are needed during pregnancy to support fetal development, rapid cell division, growth, and nerve myelination (myelin is the protective coating that surrounds nerves and helps them transmit information quickly!). Unfortunately, data suggest that most pregnant women in the U.S. consume less choline than is recommended.2

Choline is a component of several larger molecules that are important in the development of the fetal nervous system, including the brain. Choline is an essential nutrient that is critical for gene expression, neurotransmission, making membranes, and tissue expansion.3 Choline is vital to metabolism, cell structure and integrity, memory, muscle control, transportation of fats, and ensuring a healthy nervous system!

Researchers examined 54 studies that looked at the relationship between maternal choline intake, neurological development, and brain function during the first 1000 days of life. Investigators found that choline supplementation during pregnancy was associated with faster information processing in infants and improvement in memory related tasks.4 These authors further suggested that maternal supplementation with choline, particularly phosphatidyl-choline, supported normal brain development, and that higher doses may protect against neural and metabolic abnormalities.

What is the recommended choline intake?

According to the Institute of Medicine (now known as the National Academy of Medicine), pregnant women should consume 450 mg/day of choline from either food and/or supplemental sources.5 National (U.S.) survey data indicate that the average choline intake among pregnant individuals was about 319 mg/day, and only 8.5% of pregnant women consumed choline at or above the recommended amount.2 Furthermore, individuals who avoided eggs and animal proteins had even lower choline intakes. Table 1 shows the daily choline requirements by age, gender, and pregnancy/breastfeeding status.6

How do I increase my choline intake?

National data suggest that most pregnant women consume inadequate choline, and thus may benefit from increasing choline intake. Unfortunately, most prenatal supplements contain little choline, typically between 0 and 50 mg, significantly less than the 450 mg that is recommended. Many of the common prenatal vitamins contain no choline at all. To make up for this difference, pregnant women are encouraged to consume foods rich with choline (Table 2). Examples of such foods include eggs, meat, poultry, seafood, and dairy. 2,5 While beef, eggs, chicken, fish, and pork have the highest concentrations of choline, providing more than 60 mg per 100 g of product, cow’s milk is the primary contributor to dietary choline intake in the United States.3

Choline itself comes in various forms. The most prominent dietary form of choline is phosphatidylcholine, but other forms include free choline, phosphocholine, and sphingomyelin.7 Table 3 shows different forms of choline and their functions.8 An individual’s “total” choline is comprised of all the various forms and can be converted to other forms.3

High estrogen levels and increased metabolism during pregnancy increase the body’s demand for choline.10 The body converts choline into different forms to be utilized for different processes (Table 3). How choline gets partitioned into these forms differs between pregnant and non-pregnant individuals, even when ingesting the same amount of choline.10 In one study, choline was provided as supplements to pregnant women – some received the recommended amount (450 mg/d) and others received double the recommended amount (900 mg/d). The pregnant women who ingested double the daily recommendation restored the difference in partitioning between the various pathways to that of the nonpregnant state. The higher level of choline intake beneficially influenced several pregnancy outcomes including improvements of neonatal stress reactivity, faster information processing speed among infants, and better memory in children.3

Table 3. Choline-containing compounds and their functions.

Women who are breastfeeding are recommended to consume 550 mg of choline daily throughout the first year postpartum, 100 mg more than what is recommended during pregnancy.6 A breastfeeding mother needs extra choline to meet the demands of her own body as well as that of her growing baby. Choline content of breast milk can influence infants’ circulating choline levels.11 One study even suggests that choline supplementation during pregnancy and lactation reduces inflammation in breastfeeding women postpartum.12

Choline is a critical nutrient during pregnancy and lactation for neurocognitive development before and after birth with lasting effects in children. Further studies are needed to understand whether these effects persist into adulthood. Most pregnant and breastfeeding women consume inadequate amounts of choline, and prenatal and postnatal multivitamins are typically insufficient in choline. Choline supplementation during pregnancy and lactation has shown some benefits; however, more research is needed to understand health impacts of common forms of choline supplements. Thus, adequate choline intake through consumption of choline-rich foods is encouraged for pregnant and lactating women.