Infant Taste Preference Influenced in Utero and During Breastfeeding 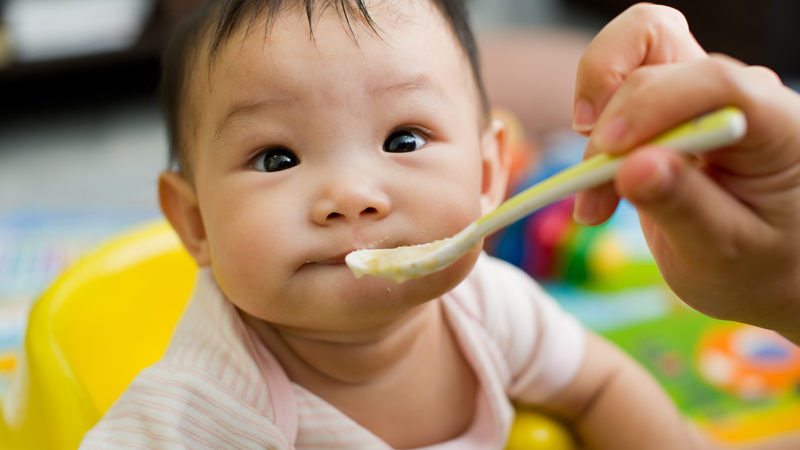 Many parents would like their children to develop taste preferences for a wide variety of foods, particularly healthy foods like vegetables. Food taste and flavor play a large role in food choices and preferences, and both biological and environmental factors influence taste preference in infants.

Some taste preferences are believed to be innate based on what promoted infant survival. At birth, a preference for sweet taste exists. This is believed to be a legacy from the benefit of consumption of the typical high energy density of sweet foods.1 Conversely, young children tend to reject bitter-tasting foods. This is believed to have developed because poisonous substances most often have a bitter taste.2 Thus, preferring sweet tastes historically promoted survival of children by ensuring adequate energy intake and avoiding the harm of potentially toxic substances.

The role of environmental factors on the early development of an individual’s taste preferences are of interest because they are a potentially modifiable way to influence food preferences and consumption in children. To study this, researchers have manipulated maternal diet with flavor capsules, foods, and beverages during pregnancy and lactation.3 Following ingestion, transfer of volatile compounds has been determined using chemical or olfactory sensory analysis of amniotic fluid or breast milk. (Note that sensory analysis requires the compound to be at a high enough concentration to be detectable by human senses.) Children’s behavioral responses to flavors following maternal intake has also been examined to understand whether the transfer of such compounds affects taste preference.

One study by Mennella et al.4 assigned 10 pregnant women to consume either a garlic or placebo capsule prior to a routine amniocentesis procedure. The amniotic fluid obtained from 4 of 5 women who ingested garlic were judged by a sensory panel to have a stronger garlic odor than those who ingested placebo. This indicates that the consumption of garlic during pregnancy significantly changes the odor of amniotic fluid.

Other studies have examined children’s responses to a flavor (alcohol, anise, carrot, and garlic) that was ingested by the mothers during pregnancy.5-8 In odor stimulus tests, newborns whose mothers ingested these flavors showed greater acceptance when re-exposed to these odors in the first 2 weeks after birth compared to infants of mothers who did not ingest these flavors during pregnancy.6,7 Mennella et al.5 demonstrated that at a mean age of 5.7 months children whose mothers had consumed carrot juice during pregnancy were more accepting of carrot-flavored infant cereal. Finally, Hepper et al.8 study found that 8 and 9-year-old children of mothers who had consumed garlic prenatally consumed more garlic-flavored potatoes in a test meal. These studies suggest that pre-natal consumption of certain foods could have a lasting effect on child food preferences.

Numerous studies have examined the effect of maternal ingestion of different foods/flavors on breast milk and subsequent children’s responses.3 These studies have shown that flavor compounds from caraway, anise, mint, garlic, carrots, and alcohol are detectable in breast milk through chemical and sensory analyses. These were perceptible as early as 30 minutes after alcohol ingestion and 2-3 hours after ingestion of other foods.

Two studies showed that repeated ingestion of carrot or vegetable juice during lactation (between 2 weeks and 4 months) increased infants’ acceptance of carrot-flavored infant cereal at 7-8 months.5,9 Flavor acceptance was specific to the flavor to which the infants were exposed, and did not generalize to acceptance of other vegetable flavors.9 Notably, in one study, the mothers themselves also reported an increase in their own acceptance of the vegetable juices that they consumed during the study.9

It is uncertain to what degree maternal intake of certain foods during pregnancy or lactation influences children’s food preferences or overall diet later in life. However, it seems likely that children’s acceptance of foods can be influenced by maternal diet through early exposure to flavors. Furthermore, the pregnancy and postpartum periods have been identified as a “window of opportunity” for making positive and lasting lifestyle changes. Thus, increasing intake and variety of healthy foods, such as vegetables, during this time may benefit both the mother and her child.