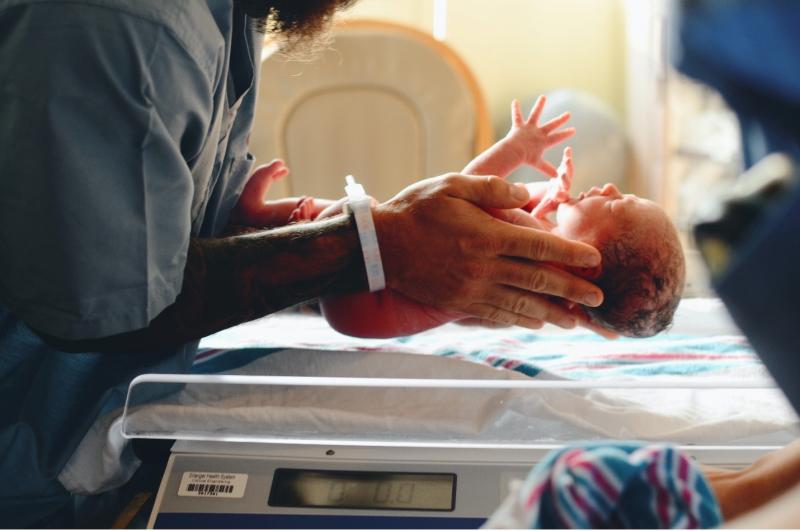 Vitamin K is an essential intervention recommended for all newborns to prevent Vitamin K Deficiency Bleeding (VKDB), and has been part of newborn care since 1961.1,2 Unfortunately, parental refusal of neonatal vitamin K has been increasing. Furthermore, higher refusal rates are associated with an increase in cases of VKDB and intracranial hemorrhage (bleeding in the brain), which can be life-threatening or result in neurological impairment.1,4 Before delaying or refusing the vitamin K injection, consider the horrible outcomes of this decision.3

What is vitamin K?

Vitamin K is an essential nutrient, one of the four fat-soluble vitamins, and humans are born with almost no vitamin K on board. Infants need vitamin K to produce normal clotting factors. Older children and adults can get vitamin K from eating meat, dairy, eggs, and leafy greens5 but breast milk is low in vitamin K. In order to absorb vitamin K from food, the body requires bile and other factors.4

What is the vitamin K injection?

The vitamin K injection is an intramuscular dose of 0.5 to 1 mg administered on a newborn’s thigh between 1 and 6 hours after birth.1 It is part of routine newborn care, should be given to all neonates, and has been injected at every birthing facility in the United States for over 60 years.1,2 The injection contains an emulsified form of vitamin K and small amounts of other safe ingredients, such as buffers. Parents who are concerned about toxicity can find ample evidence supporting the safety of both the ingredients and their concentrations in the vitamin K injection.

Why is the vitamin K injection given to newborn infants?

Vitamin K does not cross the placenta well and transfer through breast milk is low.5 Newborns also have slowed or delayed absorption of oral vitamin K due to lack of gut factors.1,4,5 As such, their levels of vitamin K are dangerously low, which leaves them vulnerable to bleeding and poor clotting.2,4 Administration of an intramuscular injection of vitamin K is the best way to prevent Vitamin K Deficiency Bleeding and intracranial hemorrhage.1,2,3,4,5

Is the vitamin K injection safe?

Vitamin K from the injection is stored in the liver and released slowly over months to provide a steady source of vitamin K until the infant obtains its vitamin K from their diet and developing gut flora.1,4 Only one case of allergic reaction has been reported since 1961, making this an extremely rare and unlikely event.1 With any injection there may be some pain, bruising, or swelling where the dose is administered.

Infants can bleed into their intestines or brain before parents can see the bleeding to know that something is wrong. Even when emergency medical care is timely, the severity of the bleeding may cause permanent impairment, especially considering about half of infants with VKDB bleed into their brains.1 VKDB is preventable by administering the vitamin K injection and refusing the shot increases VKDB risk 81-fold.

Vitamin K Deficiency Bleeding (VKDB) was previously known as Hemorrhagic Disease of the Newborn. VKDB is characterized by bruising or bleeding from the skin, mucosal surfaces, gastrointestinal tract, umbilicus, circumcision site, and/or brain.2 The highest risk of VKDB occurs during the first 6 months of life, especially in exclusively breastfed infants and infants who did not receive a vitamin K injection.1,2 When vitamin K-dependent clotting factors II, VII, IX, X cannot be made, uncontrolled bleeding is more likely to occur.2,4

Late-onset VKDB typically develops between 3 weeks and 8 months of age. Some studies show that nearly half of these infants develop intracranial hemorrhaging. Signs of an affected central nervous system, such as vomiting or seizures, may be the primary presenting symptoms.2

The overwhelming majority of reported VKDB cases happened in otherwise healthy, normal infants who did not receive vitamin K at birth.2,4

During cases of late-onset VKDB, infants can begin showing symptoms (vomiting, fussiness, and sleepiness) after they have a brain bleed.4One study found that the most common reason for refusal was the faulty impression that vitamin K is unnecessary in uncomplicated births of healthy infants.4 This same study tracked cases of VKDB and found that 5 of the 7 cases with serious complications required transfusion of fresh frozen plasma and occurred in otherwise healthy babies whose parents refused the vitamin K injection.4

If parents have any additional questions, the baby’s healthcare provider can answer any concerns.

Availability and accessibility of the vitamin K injection

VKDB is rare in the United States because routine newborn care at hospitals and birthing centers includes an injection of vitamin K. Depending on the type, rates of VKDB range from 1 in 60 to 1 in 25,000 newborns.1 Countries where the vitamin K shot is unavailable have higher rates of VKDB.1,2,4  If planning a home birth, it is important to make a medically informed decision and incorporate recommended newborn care standards, such as the vitamin K injection.4

Vitamin K levels in breast milk are insufficient to provide all the vitamin K a baby may need due to low transfer of vitamin K into breast milk. No studies have evaluated whether maternal supplementation with vitamin K prevents VKDB.2,4 We do know that in many instances providing the infant with an oral source of vitamin K is too slow to prevent VKDB.2

There are no comparable alternatives—intramuscular injection of vitamin K1 given at birth is the only recommended measure to prevent VKDB. Infants do not necessarily have reliable intestinal absorption of oral vitamin K.4 In countries where the injection is not available, oral supplementation has been used but is significantly less effective at preventing VKDB and its life-threatening complications.1,4 Timely availability of vitamin K via intramuscular administration is the safest and most efficient option for all newborns.1,2,4

The first hour after delivery should be protected for mother-infant bonding and initiation of breastfeeding. Following bonding, the vitamin K injection can be given within 6 hours of birth.1 A parent can ask to hold their infant while the vitamin K shot is given. Babies feel less pain from shots if they are held and allowed to suck while being comforted.1,4