Clomiphene is a common drug that women use to help stimulate ovulation.  Clomiphene increases the chance that eggs will be released from a woman’s ovaries by stimulating the secretion of several hormones used to regulate their reproductive cycle. It works primarily on the estrogen receptors in the hypothalamus of the brain. This ultimately leads to an increase in the pituitary hormones LH and FSH which are responsible for stimulating the ovaries to develop a follicle and thus release an egg. By taking clomiphene starting at 50 mg for 5 days, some women will become pregnant 5-10 days after their treatment. Clomiphene stays in the bloodstream for up to 22 days and in stool samples even 6 weeks after the last dose (Weller 2017).

Current guidelines recommend against breastfeeding while taking clomiphene for a few reasons. First, there is no research on whether clomiphene is excreted in breast milk. If it is secreted, there is little data on the potential side effects clomiphene could have on a baby’s reproductive system and hormone levels. We know that clomiphene is stimulatory in post-pubertal females and increases ovulation, but for prepubertal children this is likely different. One study measured the effect of clomiphene on three important hormones: FSH, LH, and Testosterone, in prepubertal males. The results suggested that even higher doses of clomiphene did not stimulate elevated hormone levels in prepubertal males. This would suggest that the drug has no effect on the children or had suppressive effects on the hormones (Kulin 1972). It is important to note that the children in this study were not infants, only prepubertal. No research was found on the drugs effect in prepubertal girls or infants. There is some evidence of a possible association of clomiphene with fetal malformations (specifically effecting the spinal cord and urethra development) that is not yet confirmed (Scaparrotta 2017).  With so many unknown factors at play, caution is recommended to mothers who are breastfeeding while taking clomiphene.

In 1973, a study had women who were not interested in breastfeeding take clomiphene at 50 mg dose for 10 days and 100 mg dose for 5 days like the regimens used to induce ovulation. Then, the study had the women rate the drug’s impact on the discomfort, engorgement, tenderness, and lactation from their breasts. The 50 mg dose resulted in 92% of the 26 women to rate a decrease in all factors listed. The 100 mg dose resulted in 98.2% of 110 women to rate a decrease in all the factors listed. Thus, the drug was extremely effective in inhibiting lactation (Zuckerman 1973). The reason for the suppression of lactation by clomiphene is likely due to its impact on prolactin. Prolactin is a hormone secreted from the pituitary gland below the hypothalamus in the brain that directly stimulates the glands in the breasts to produce milk (Image 1). In a similar study, clomiphene citrate 100 mg was given for 3 days and the prolactin levels were measured at 65% of the initial value in the 15 women. Clinically half of the women noted a suppression in lactation after 5 days post-partum (Weinstein 1976).  The reduction in prolactin is likely the mechanism by which milk secretion is decreased. 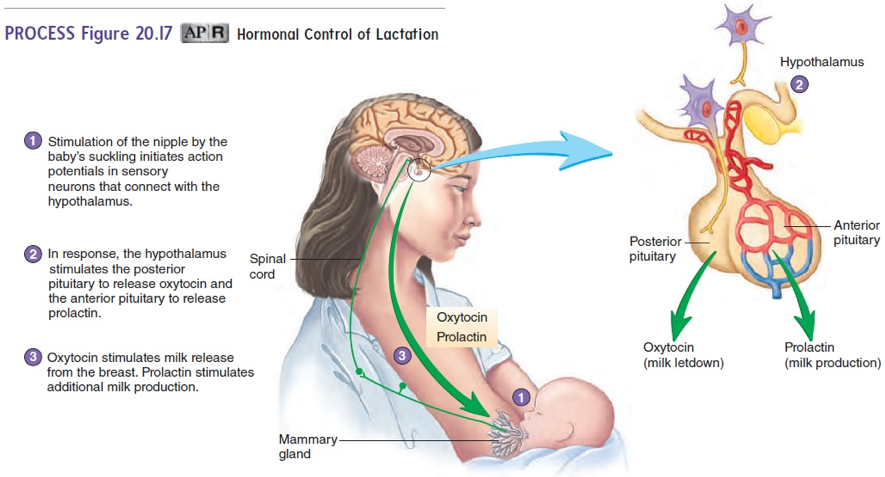 In conclusion, there are many unknown effects of clomiphene on infants. Without any data on the secretion of clomiphene into breastmilk, it is impossible to know what dose of clomiphene the infant would receive in the weeks following maternal exposure to this drug. We also do not know what affect the drug has on the infant, especially developing female reproductive systems. Lastly, clomiphene is likely to inhibit lactation by decreasing prolactin level. These are some of the reasons it is recommended against breastfeeding while taking clomiphene citrate.