When looking at the research for IUD insertion, we first must ask “what type of IUD are you interested in?”. Copper IUDs (ParaGuard), do not release any hormones and thus do not affect breast milk production. The copper IUDs last for 10-12 years depending on your age and are made of a polyethylene frame with fine copper wire wrapped around it. Copper IUDs can have some unpopular side effects including heavy menstrual bleeding and increased uterine cramps. So, what about the more popular type of IUD, the progesterone IUD? The 5 year progestone IUDs releases levonorgestrel, a low dose progesterone, to prevent pregnancy. There are 3 year progesterone IUD’s that release even lower doses of levonorgestrel. The levonorgestrel dose is small regardless of which IUD a woman chooses and the progesterone mostly stays in the uterus having a local effect. Most women’s blood levels of the levonorgestrel run between 100-250 pg/ml which is much less compared to oral progestin pills (1500-2000 pg/ml) (Seeber 2012). Whether progesterone IUD’s should be used in breastfeeding mothers is debated among physicians because occasionally women who have received a progesterone IUD report decreased milk production following IUD placement. It is important to remember that there are many reasons that breast milk production can slow or stop. Sometimes this is just a natural decrease in a women’s prolactin level that causes her milk production to decrease. It is best to look at randomized control studies to see the effect of progesterone IUD on breastmilk production. 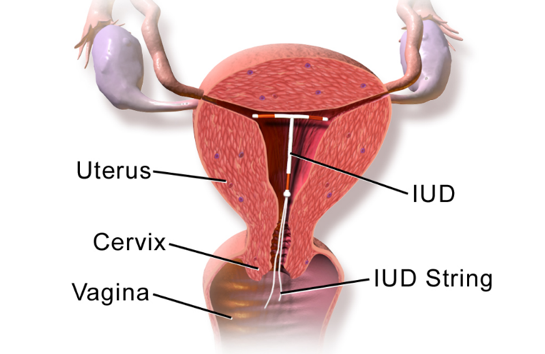 New Mexico HSC and University of Utah collected data from 2014-2016 on women aged 18-40 years old to determine the effects of receiving the progesterone IUD immediately after delivery versus 4-8 weeks after delivery. There were 132 women in the immediate insertion group and 127 women in the delayed insertion group. First, both groups had the same amount of milk production 8 weeks later. Second, the onset of milk production after delivery also showed no significant difference between the two groups. This demonstrates that immediate postpartum levonorgestrel IUD insertion is equivalent to delayed insertion. Immediate insertion is an acceptable option for women who are planning to breastfeed. (Turok 2017)

In another study, they raised the stakes even higher by comparing 63 women who received an intra-cesarean IUD (during the c-section) to women who received IUD insertion at 6-month post-partum. They were all the levonorgestrel IUDs. There was no difference in the number of women breastfeeding at 6, 12, and 24 weeks. This study adds to the growing body of evidence that concludes most women can successfully breastfeed with immediate placement of an IUD (Levi 2017).

Lastly, a comparative randomized study of women who received progesterone IUD (163 women) vs Copper T380A IUDs (157 women), can shed light on which is better. Insertions were done at 6-8 weeks post-partum. The data shown below demonstrates that there is no significant difference in the number of women breastfeeding. For example, in Table 1 Women who were breast feeding with or without formula supplementation was 98.7% with Progesterone IUD and 99.3% with Copper IUD at three months. The percent of women breastfeeding remained similar between the groups when their babies were 6, 9, and 12 months old, showing that the net cumulative rates of breastfeeding were in general high and comparable in both women who had progesterone IUD or Copper IUDs. Note the percentage of women breast feeding went down as babies’ transition to table food at 6 months and some women naturally stop producing milk before their infant turns 1 year old. This study’s data also suggested there was no difference in the growth and development of the children (Shaamash 2005).

In conclusion, from the above well-done studies the data suggests that women who choose to get an IUD after their delivery demonstrates no significant difference in when their milk comes in, how long they can breastfeed their baby, and the growth and development of their baby. It is considered safe and equivalent to waiting to get a progesterone IUD placed or getting a copper IUD at any time.

Disclaimer: IUDs inserted post-partum have an small but increased risk of explosion of the device from the uterus and perforation of the uterus, so you should discuss these and other complications with your physician before the procedure.