The InfantRisk Center gets lots of calls on aspirin, both 81 mg and 325 mg/day doses.  We who work in Pediatrics, have for 50 years worried about the risk of Reye syndrome,  that occurred many years ago following the use of aspirin in infants and childern while treating fever in viral syndromes.  This was an interesting study for us, because we were totally unable to find ANY acetylsalicylic acid in the breastmilk of mothers consuming aspirin. We found small levels of Salicylic acid, the metabolite of aspirin,  but no aspirin itself.  Interestingly,  aspirin binds to platelets in the portal circulation of the gut (which is how it works as an anticoagulant). Once it passes the liver ALL aspirin is absorbed by the liver and hence we were totally unable to find it in milk.  Great news.  We don't have to worry about aspirin in milk.   TWH

Aspirin has antipyretic and anti-inflammatory properties and is frequently used by pregnant and lactating women. However, its transfer in human milk when administered at low dose has not been reported. Research aim: This study aimed to evaluate the transfer of acetylsalicylic acid and its metabolite, salicylic acid, into human milk following the use of low dose aspirin. In this study, milk samples were collected at 0, 1, 2, 4, 8, 12, and 24 hours from seven breastfeeding women after a steady-state daily dose of 81 mg of aspirin. Milk levels of acetylsalicylic acid and salicylic acid were determined by liquid chromatography-tandem mass spectrometry. Acetylsalicylic acid levels were below the limit of quantification (0.61 ng/ml) in all the milk samples, whereas salicylic acid was detected at very low concentrations. The average concentration of salicylic acid observed was 24 ng/ml and the estimated relative infant dose was 0.4%. Acetylsalicylic acid transfer into milk is so low that it is undetectable even by highly sophisticated methodology. Salicylic acid does appear in the human milk in comparatively low amounts, which are probably subclinical in infants. Thus, the daily use of an 81-mg dose of aspirin should be considered safe during lactation. 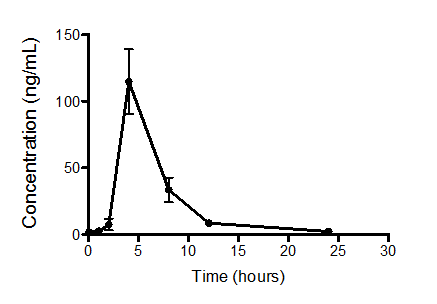