Methotrexate is a rather dangerous drug and must be used really cautiously, particularly in pregnant and breastfeeding mothers.  We get this call all the time in breastfeeding mothers using this drug.  Fortunately we found  this mother who was willing to give milk samples following high dose therapy for Placenta Accreta.   This mom received 92 mg methotrexate following delivery.  Interestingly,  milk levels were really low.  This is an antifolate drug used in many diseases,  and is quite risky around pregnant women and previously I thought in breastfeeding mothers.  This data suggests that milk levels of methotrexate, even following this high dose,  are quite low (RID= 0.11%).  This was one of those questions I always hated to answer,  because we had NO data on its transmission into human milk, and its relatively dangerous.   Seems its levels in milk are very low.  We still need to be cautious,  but I can rest a bit easier now.   TWH

Morbidly placenta accreta as a cause of postpartum morbidity is increasing in incidence. One conservative option is use of methotrexate as an adjuvant therapy for the management of placenta accreta. There is concern that use of methotrexate in a lactating mother could potentially expose her neonate to harmful effects of this medication. Here we report a 29-year-old woman subjected to methotrexate treatment for placenta accreta. Her child was delivered at 32 weeks weighing 3 lbs. On postpartum day 5, this patient was diagnosed with placenta accreta and treated with intramuscular methotrexate for 3 consecutive days. She received 92 mg methotrexate intramuscularly daily, and was advised not to breastfeed. She collected milk samples on day 2, the 0 hour before the second dose and at 1, 2, 4, 8, 12, and 24 hours after taking the dose. A high-performance liquid chromatography mass spectrometry method was developed to measure methotrexate and its metabolite 7-hydroxymethotrexate levels in milk samples. Very low levels were found for both methotrexate and 7-hydroxymethotrexate in the milk samples obtained. The results indicate that methotrexate or its metabolite receded to minimum concentration over a period of 24 hours. This case report found the relative infant dose of methotrexate to be 0.11%. Methotrexate does transfer into breast milk, although the levels detected were very low. However, caution should still be used in counseling mothers regarding breastfeeding with this toxic drug. 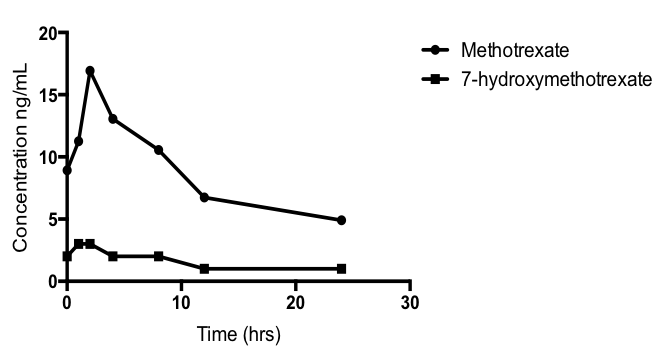